An annual holiday parade performed by slaves in the West Indian sugar islands in the 19th Century. For a few days, slaves were allowed to pretend they were free, going about masked and disguised, poking fun at their masters—until the rules of proper "civilized" behavior were clamped down again for another year.

Jonkanoo, Jamaica, 1838. Belisario 08, as shown on www.slaveryimages.org, sponsored by the Virginia Foundation for the Humanities and the University of Virginia Library

Lisa Jensen
I'm the author of the novels,"Beast: A Tale of Love and Revenge," "Alias Hook," and "The Witch From the Sea," proprietress of the entertainment blog, Lisa Jensen Online Express, and longtime film critic for the alt weekly, Good Times, in Santa Cruz, CA. My movie reviews also appear on Rotten Tomatoes.

Read about Tory and Jack's previous adventures in The Witch From the Sea. Pirates! History! Romance! No zombies!

Images from 18th Century Tarot of Marseilles, as seen on www.wischik.com/lu/tarot/index.html

Welcome to the home page of RUNAWAYS: A NOVEL OF JONKANOO

(The sequel to THE WITCH FROM THE SEA)


All Tory Lightfoot has ever wanted is her freedom. A half-white, half-Mohawk runaway from the intolerance and stifling gentility of a Boston orphanage, accidental seafarer Tory has washed up in the British Leeward Islands of the West Indies. Now that she and the man she loves, Jack—acrobat, failed actor, and expatriate Englishman—have survived the pirate trade together, they struggle to make an honest living as street performers and escape their dangerous past.

But freedom is a luxury in 1825 in the British colonial sugar islands, where fear of a slave rising, real or imagined, infests everything. With the help of the nimble and cultured former slave, Alphonse Belair, Jack and Tory learn to navigate both high and low society in the islands.

But even as Tory revels in the freedom of her life on the road, and her intoxicating nights with Jack, they are drawn into the simmering undercurrents of slave rebellion. As tensions mount in the islands between the slaves, the free people of color, and the authorities, Tory discovers the greatest jeopardy to her freedom is the color of her skin. Soon, she's trapped in a web of enslavement worse than anything she has ever imagined; regaining her freedom and protecting the man she loves will take the performance of a lifetime.

From rollicking holiday slave parades to the grand elegance of "the season" at the luxurious Bath Hotel, Runaways is both love story and thriller told with a dash of Dickensian humor.

To begin with Chapter One, scroll down to the bottom of the Blog Archive (left-hand menu), click on the second entry, January 3, 2010, and follow the story upwards through each installment. (At the end of each chapter, click on "Newer Posts" to read the next one.)

I love to hear from readers, so please do feel free to leave a comment below, or send an email to lisajensen(at)sbcglobal.net. (Remember to substitute @ for (at)!) 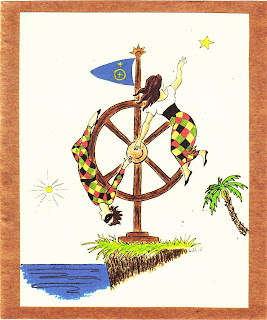